An Internal Ratings Based (IRB) Approach

Introduction and the Need for an IRB (Internal Ratings Based) Approach

In simple terms, IFRS9 requires institutions to account for expected credit losses on an ongoing basis in a manner consistent with the fundamental principles of accounting. By contrast, Basel regulations are intended to ensure financial institutions have sufficient aggregate capital resources to withstand significant adverse stress.

While the two sets of rules are therefore aimed at different aspects of good credit risk management, both expect institutions to adhere to “know your credit risks” (KYCR) – i.e. to effectively understand, measure, monitor and manage the credit risks to which they are exposed. Analytical consistency (and the verifiable demonstration of that consistency) between assumptions used to derive Basel calculations, IFRS 9 calculation, and other credit-related calculations is essential and we expect regulators to insist upon analytical consistency going forward after the expiration of any initial transition concessions.

Many of the market solutions that have emerged in advance of IFRS 9 seem interesting in concept but are wanting in terms of practical implementation. Disappointingly, many of those solutions also fail to address the fundamental need for analytical consistency with Basel (and other existing credit management methodologies).

In our opinion, the use of existing, proven IRB (internal ratings based) credit methodologies to seamlessly and (analytically) consistently derive the necessary parameters for IFRS 9 calculations is not only the most efficient approach but is also essential if institutions wish to avoid the short-comings, effort and costs that will follow the adoption of a divergent solution.

An IRB (Internal Ratings Based) Approach to IFRS 9

The IRB-based approach for IFRS9 commences by classifying the facility under consideration (as required under IFRS9) as a function of the firm’s latest long-term PD (probability of default) rating and how that has changed (if at all) since the firm’s rating at the time the asset/liability was first recognised. The (Basel) IRB methodology is used for both PD ratings.

Prospective PIT PD rates (point-in-time PD rates) for the firm’s latest (long-term Basel) PD rating are then automatically derived at the commencement of each IFRS 9 accounting exercise as a function of the institution’s actual past default experience and past observed (and forecast) macroeconomic risk factors (typically GDP-related).

Those prospective PD rates (and accompanying loss given default, LGD, scores for the facility) are then deployed to determine the expected credit losses (and associated probability frequencies) for each future contractual period of the asset/liability under consideration. The expected future credit loss (at the effective calculation date) for the facility is then calculated (as required under IFRS 9).

IFRS 9 regards a financial asset as being “credit-impaired” when one or more events that have a detrimental impact on the estimated future cash flows of that financial asset have occurred.

Examples of evidence (provided by the IASB) of being “credit-impaired” include:

“Significant financial difficulty” (a) is typically meant to mean that the borrower is technically bankrupt (i.e. balance sheet liabilities exceed balance sheet assets on an accounted or economic basis), which is akin to an expectation that the borrower (even if currently servicing all obligations in a timely manner) will not be able to continue to service all future obligations in a timely manner.

Under the Basel default definition, a borrower meeting criterion (a) would be classified as “D” (score “11.00) while under Rating Agency classifications, such a borrower falls into the “CC” or “C” designations (scores of “9.75” and “10.00”).

Breach of contract, such as a default or past due event

An event of actual payment default would be classified as “D” or “SD” (score of “11.00”) under Rating Agency definitions. Under Basel, a payment default is classified as “D” (score of “11.00”) if (a) the event has not been cured within 90 days or (b) the payment is less than 90 days overdue but there is an expectation that this will not be cured by the end of 90 days. General migration rates from even 1-day overdue status to 90-days overdue status (and to ultimate economic loss) are very high. Under the Basel credit assessment methodology, an issuer is automatically downgraded to “CCC-“ (score “9.50”) effective from the day after the missed payment fell due. (The sole exception to the automatic downgrade is (a) when the borrower has pre-advised the lender that – due to exceptional circumstances – the payment would be made late; and (b) the lender has satisfied itself that the circumstances are exceptional in nature and not due to credit deterioration – i.e. consistent with the requirements under IFRS9 for rebutting the presumption that 30-days past due equates to creditimpairment – and (c) the lender expects the payment default to be fully cured within 90 days of its due date). As information comes to light (or fails to come to light) about the borrower subsequent to the downgrade the borrower’s rating/score will be further amended over a short time period.

The information classification (at any point in time) is as follows:

If cases (i) or (ii) apply at any point then the borrower’s credit score is then reviewed effective from that date. The circumstances that gave rise to the payment default are fully factored into the borrower’s score.

If case (iii) applies then the borrower’s credit score is set to default (score “11.00) effective from the date that evidence emerges.

If case (v) applies then an automatic downgrade to “D” (score “11.00”) occurs effective from the date the payment is 90 days overdue.

If cases (vi) or (vii) apply then the borrower is regarded as being in “emergence from a default” and a revised score is assigned in a manner consistent with the lender’s practices for dealing with emergence from default. The score is effective from its assignment (which occurs after 90 days from the original payment default).

Generally, a penalty is applied post-default. So, for example, if the borrower would – all other things being equal and absent the past payment default – normally be assigned a score of “B” then the borrower would actually only achieve a worse rating. In this example, assuming the borrower continued to exhibit a stable “B” profile going forward (absent the penalty), its actual credit scores may be (for example) “CCC” rising to “CCC+” after 1 year, to “B-“ after two years and then (finally) to “B” after three years.

Additionally, in case (vii) the incurred economic loss will have been recognised (at its occurrence date) and the asset may be subject to derecognition and re-recognition (as a new asset) requirements.

Other breaches of contract (e.g. non-payment defaults such as covenant breaches) automatically result in a rating/ credit score review. The seriousness (or otherwise) of such breaches – and its (judged) impact on estimated future cash flows – is therefore fully factored into any rating/score revision. The revised rating/score therefore wholly dictates whether the event results in the asset being categorised as “creditimpaired”. This approach is fully consistent with the spirit inherent in IFRS9.

The pertinent score or rating to use for IFRS9 purposes is that which was effective at the beginning of the accounting period concerned (or should have been effective at that date in the event that more information becomes available between the effective accounting date and the cut-off date at which accounts are actually being prepared).

The implication is that the lender has revised terms (or provided other concessions) as a result of “financial difficulty” of the borrower. Such a situation would result in a revision to the Basel rating/score as a matter of course. The revised rating/score therefore fully reflects the borrower’s changed circumstances in accordance with the spirit of IFRS9.

In addition, if the lender’s “concession” is one involving economic loss to the lender (relative to the original loan) then this would constitute a Basel default and the borrower would either be scored “11.00” or an “in emergence from default” led score that not only reflects the borrower’s revised credit profile (including its financial difficulty and the impact of the concession granted) but also includes a penalty as a result of the default happening.

This constitutes a Basel default and would be scored “11.00”.

The disappearance of an active market for that financial asset because of financial difficulties; or the purchase or origination of a financial asset at a deep discount that reflects the incurred credit losses.

Such situations are automatic triggers for a review of the borrower’s credit rating / score. External indicators of this nature form part of the “check and balance procedures” that are integral to an internal ratings system for Basel (IRB) purposes. Indeed – unless the event itself was extremely rapid – it is likely that such indicators would have triggered a review well in advance of reaching this point.

The adoption of a threshold of “9.75” (“CC”) for designating an asset as “credit- impaired” appears consistent with the spirit, definitions and aims of IFRS9, albeit users are free to impose a more conservative internal threshold if they judge that appropriate for their business model. 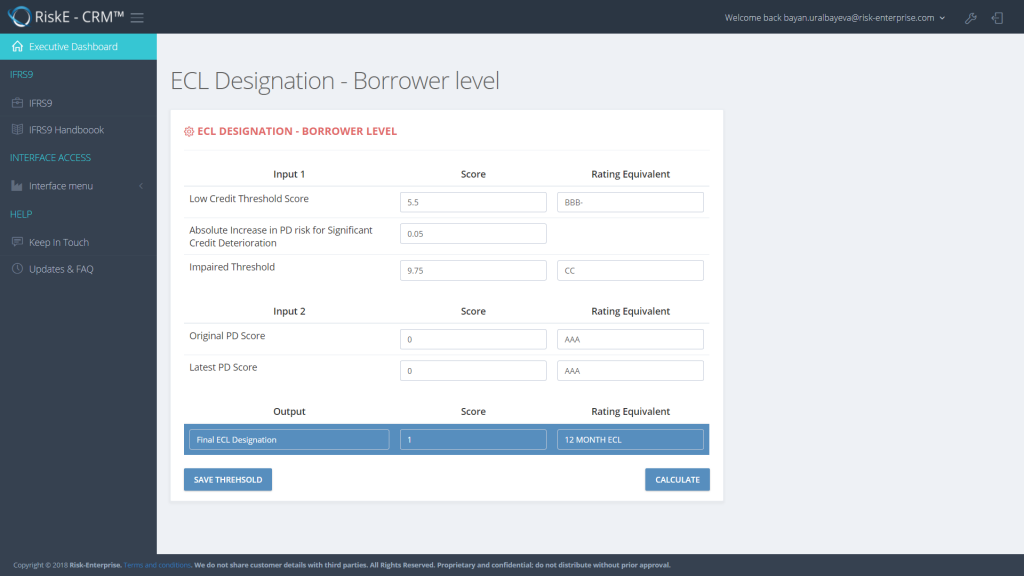 The lifetime ECL approach is mandated for all credit-impaired assets.

The use of an IRB-based framework for calculating ECL ensures consistency not only with the analytics underpinning Basel calculations but also with the treatment of IFRS9 Category 1 and Category 2 assets.

Effectively, the forecast macroeconomic conditions (and their impact on default and recovery) are automatically used in a consistent manner for Category 3 assets.

For those assets, not “in default” the tools and ECL computations proceed in the same manner as for Category 1 & Category 2 assets.

PIT (point-in-time) PD rates are automatically derived as a function of (a) the current TTC (through-thecycle) 1-year PD rates, (b) the observed past default experience of the lender by (TTC) scoring category, (c) the current borrower profile (by PD rating) at the calculation date, and (d) the appropriate macroeconomic factors (generally GDP-related) (historical and projected).

The contractual payments under the asset are then examined over each future period and the forecast PIT PD rates and recovery rates are taken into consideration to determine the probability-weighted expected cash flows or losses. The discounted value of these cash-flows is then compared with the asset’s carrying value (plus any accumulated loss provisioning).

For those credit-impaired assets where default has already happened (according to our IRB definition) prospective PIT default rates are no longer pertinent. The computational focus is therefore solely on recovery prospects albeit in a manner that is analytically consistent with the approach taken for other assets.

In general, a “case-by-case” approach is consistent with good risk management practice when (i) the exposure amount is large (and important to the lender) and (ii) the lender has specific information about the defaulting borrower and its current financial profile that enables a firm-specific calculation to be made.

More generalised quantitative approaches are appropriate on practical grounds when the exposure amounts are small (so that the cost of evaluating a precise firm-specific approach outweighs the benefits of the extra precision) or insufficient information is available (at the calculation date) to facilitate a firmspecific approach (in which case any attempt at a firm-specific computation would be spurious). Furthermore, for large portfolios of modest exposures (such as SME or retail), a collective approach will also typically be adopted with quantitative techniques applied to a sub-portfolio of defaults.

There may also be circumstances whereby a quantitative approach is initially followed for a large case, due to lack of information to facilitate a firm-specific calculation, but the case is subsequently migrated at later accounting periods to a firm-specific approach (once more information is available).

For IFRS 9 purposes, the IRB LGD model is deployed in the normal manner for Category 3 assets to calculate prospective LGD rates on both bases over a 5-year period incorporating: (a) EVA, (b) EVA volatility, and (c) forecast prospective EVA adjustments (consistent with our IFRS 9 macroeconomic forecasts).

Finally, the observed migration rates over time from default status (to emergence from default or insolvency) are then employed as weights to the prospective LGD results to finalise the ECL calculations for IFRS 9 purposes.